Wouter Bos is a CNRS Researcher at the Fluid Mechanics and Acoustics Laboratory (LMFA), at École Centrale de Lyon, France. He works on the fundamental aspects of turbulence in fluids and plasmas. After studying Applied Physics at Delft University (Netherlands) Wouter Bos obtained his PhD on mixing in turbulent flows from École Centrale de Lyon, supervised by Jean-Pierre Bertoglio. He subsequently worked as a postdoctoral researcher at the M2P2 Laboratory (Marseille, France) with Kai Schneider, and joined the LMFA as a CNRS Researcher in 2007. He obtained his accreditation to supervise research in 2012. Wouter Bos collaborates closely with researchers in the United States, England and China. In recent years, he has been working on the problem of flows in the presence of electric currents and magnetic fields (Magnetohydrodynamics, MHD), the understanding of which is essential in the design of fusion reactors such as ITER, being built in Cadarache. 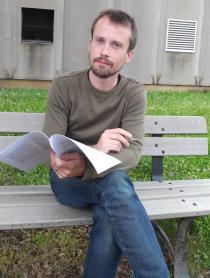