Vincent Fridrici graduated as an engineer in 1999 and received his PhD in 2002 from the École Centrale de Lyon. He has been an Assistant Professor and researcher in materials and tribology since 2003. His teaching activities concerns materials, their properties, damages and methodologies of selection, at the École Centrale de Lyon and other Lyon institutions. From 2011 to 2016, he also was in charge of the Professional Teaching Unit (UE Pro). His research activities within the Tribology and System Dynamics Laboratory (LTDS) focus on the understanding of friction and damage phenomena of materials under tribological loadings, which have implications in many industrial sectors (aerospace, automotive, health...). He is very involved in relations with Tohoku University (Sendai, Japan), as part of the LIA ELyT Global. He was an elected member of the Board of Directors of École Centrale de Lyon until 2017, and Deputy Director of the Department of Materials and Surface Science and Technology (STMS) from 2008 to 2018. He has been co-leading the Ecole's Teaching Evaluation Committee since 2016. 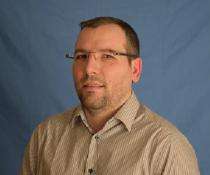