Holding an Engineering degree in Telecommunications, and
a PhD from the University of Rennes in the field of signal and
image processing, Stéphane Derrode was a postdoctoral fellow at
Télécom Bretagne (Brest, France) from 1999 to 2001. Then he
served as an Associate Professor in Computer Science first at École
nationale supérieure de physique de Marseille in 2001 and then at
École Centrale de Marseille in 2005. He joined École Centrale de
Lyon in 2014 where he is Professor in Computer Science in the
Department of Mathematics and IT. His research interests now
include non-linear, non-Gaussian state-space systems for time
series data analysis, with applications to social signal processing,
object tracking in video and dynamic biometry. 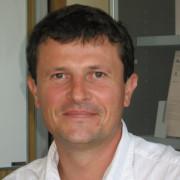