Mikhael Gorokhovski earned his PhD in Physics and
Mathematics in 1981. For ten years he worked at the University
of Kazakhstan. In 1991, he went on to continue his research at the
University of Rouen, France, first as a Senior Fellow Researcher
at the French CNRS, and then as Visiting Professor. In 1995, he
received the full Professor position at the University of Rouen. In
2006, he moved to Lyon, as Professor of École Centrale de Lyon.
His research concerns fluid mechanics and energy, where he is
trying to understand the physics in atomization processes, multiphase
flows, turbulence, and turbulent combustion. His lectures
address mainly those subjects. Since 2000, Mikhael Gorokhovski
has regularly been appointed Senior Fellow at Stanford University.
Currently, he is member of the Editorial Board of the Atomization
and Sprays Journal, and he serves also on the GENCI board of
experts (evaluation of scientific massive computing projects). He
has supervised 22 PhD students, including 15 at the University of
Rouen and 4 at l’École Centrale de Lyon. 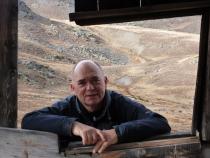