He received the Ph.D. in chimie des matériaux in 1990 from the University of Montpellier II, France. His thesis work focused on PECVD processing for InP-based MISFET. He joined the French CNRS as permanent Researcher in 1990. From 1990 to 1992, he worked at EM2 of University of Montpellier II by developing GaSbbased laser diodes. In 1992, he joined the Lyon Institute of Nanotechnology (ex-LEOM) at École Centrale de Lyon where he is currently managing the Nanolyon technology center (total area of 1300m² with 425 m² cleanroom facilities at ECL). In the Nanophotonic group he is leading the III-V based microtechnologies and optical microsystems developments in several national and European scientific projects. His current interests include heterogeneous integration, optoelectronics, micromachining and micronanofabrication related to III-V based materials for new photonic systems. 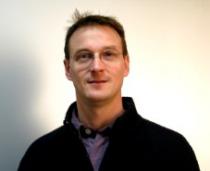