Christophe Bogey is a graduate of École Centrale de Lyon
and holds a PhD in Aeroacoustics. He joined the French CNRS
in 2000 as a researcher at the Fluid Mechanics and Acoustics
Laboratory (LMFA). He obtained his accreditation to supervise
research in 2007, and became a CNRS Senior Researcher in
2012. He heads the Turbulence and Aeroacoustics research team
of the LMFA Acoustics Centre since 2004. He has authored or
co-authored more than fifty publications in refereed journals in
the fields of computational fluid dynamics and aeroacoustics,
turbulence and jet noise, and presented more than a hundred
papers in international conferences. He was involved in the JEAN
(Jet Exhaust Aerodynamics and Noise) and CoJeN (Computation
of Coaxial Jet Noise) European projects. He was awarded the
Yves Rocard Prize of the French Acoustical Society in 2002,
the Edmond Brun Prize of the French Academy of Sciences in
2009, and is an Associate Fellow of the American Institute of
Aeronautics and Astronautics (AIAA). 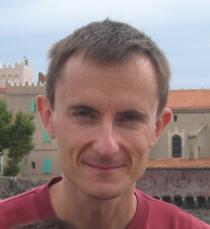