École Centrale de Lyon has established partnerships with international networks based across Europe, the Mediterranean and the world.

École Centrale de Lyon is a member of the T.I.M.E. network that includes 50 internationally renowned universities. The network’s common goal is to train bilingual and bicultural engineers who will possess indispensable qualities, such as the ability to adapt and work in multicultural environments, which are often very different to the two countries in which they had studied. This network was originally European based but has now opened up to the world: Australia, Brazil, China, Japan, Russia.

Ever since the first partnership agreement signed between École Centrale de Lyon and Tsinghua University in 1990, such collaborations have extended to the Jiaotong universities of Shanghai, the Southwest and Xi’an.

A 4+4 agreement was signed in 1996. Its objective was to educate highly skilled, bicultural engineers in likeness to the T.I.M.E. network. This agreement has since expanded to include five Écoles Centrales and the Chinese universities.

The 5+4 network has allowed the mutual interests of the students to be vigorously advanced.

Graduates enter their professional careers in China or France within multinational groups or Chinese companies.

* This 5+4 network could become the 5+6 network if the partnership currently being formed with the Jiaotong universities of Beijing and Zhejiang are formalised.

Following on from the bilateral research collaborations established between École Centrale de Lyon and several Brazilian universities, a Franco-Brazilian network has emerged to offer a framework for academic exchanges. This network comprises:

This dynamic network allows scores of Brazilian students to come to France and offers French students opportunities to study in Brazil, whether for a double degree, a year-long exchange or for a laboratory placement.

Under this network, students from École Centrale de Lyon, with other young people of the region, carry out joint projects every year on topics presenting the key assets of the Mediterranean. 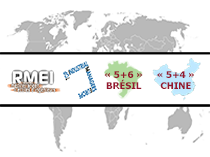