Siegfried Fouvry is CNRS Senior Researcher at the Tribology
and System Dynamics Laboratory (LTDS) of École Centrale de
Lyon. He graduated in Engineering in 1992 and joined the LTDS
in 1997 as researcher for the French CNRS after obtaining a
PhD in Materials Engineering. His fields of research address the
experimental study and modelling of fretting wear and fretting
cracking phenomena through a coupled mechanical and material
approach. Following a research stint at Oxford University in 2003,
he has broadened his field of research to fretting fatigue issues.
He has been appointed Senior Researcher at the French CNRS in
2007, and is now Head of the LTDS research group on durability,
fretting and interface. This group’s research actions deal with
damage in contacts and assembling. He has co-authored over 100
publications and was awarded the HIRN Prize in 1997 and the Jean
Mandel Prize in 2000 for his works in mechanics and materials
rheology. He is member of the Metallurgy and Materials French
Society’s fatigue commission (SF2M) and French representative
of the International Symposium on Fretting Fatigue’s organising
committee (ISFF). 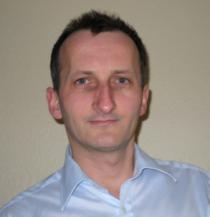