Holding a Master in Materials Science from École Normale Supérieure de Lyon and University Claude Bernard - Lyon-I, and agrégé in Physical Sciences, Julien Scheibert obtained his PhD in Condensed Matter Physics from the Paris-VI University in 2007. Since 2011, he has been working as a CNRS Researcher at the Tribology and System Dynamics Laboratory (LTDS) at École Centrale de Lyon. His research topics lie at the interface between physics and mechanics. He worked on human tactile perception, in particular on the role of fingerprints in the perception of fine textures. More recently, he investigated the fast rupture of brittle heterogeneous solids. Today, his main focus is on the dynamics of the onset of sliding along frictional contact interfaces between rough solids, using both experimental and numerical tools. He also develops metamaterials with controlled frictional properties. 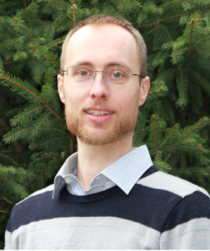