Christophe Bailly is a Professor of Fluid Mechanics and Acoustics at the Ecole Centrale de Lyon. He graduated from Centrale Lyon (1990), and received his PhD from the Ecole Centrale Paris (ECP) in 1994. After one year at the Centre National d'Etudes Spatiales (CNES), he joined the Laboratoire de Mécanique des Fluides et d’Acoustique (LMFA, UMR 5509) at Centrale Lyon in 1995. As lecturer, he has served at ECP (1995-2006) and ENSTA (2001-2020). He is also with the Institut Universitaire de France (junior member 2007). He is co-author, with Geneviève Comte-Bellot, of two textbooks in turbulence, has authored or co-authored over a hundred referred papers in the area of turbulence and aeroacoustics. He is also the recipient of the Yves Rocard Prize from the French Acoustical Society (1996), of the Alexandre Joannidès Prize from the Academy of Sciences (Paris, 2001), of the Air and Space Academy (Toulouse, 2016) and of the CEAS Aeroacoustics award (2020). He has been Director of the LMFA since 1st January 2020. 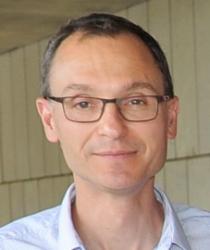