The ‘École Centrale lyonnaise pour l’Industrie et le Commerce’ was founded on 3 November 1857 by François Barthélemy Arlès-Dufour, a Lyon businessman and humanist, and Désiré Girardon, a teacher at the Martinière school who wanted to ‘educate the best Martinière students in chemistry, industrial mechanics, civil engineering and industrial design’.

Fourteen students became the first graduates of the school in 1860.

To the heart of Lyon

Looking onto the world from Écully

2007: The Intergroup became the Écoles Centrale Group with Lille, Lyon, Marseille, Nantes and Paris. 150th anniversary of the institute’s founding and the 40th of its move to the Écully campus. 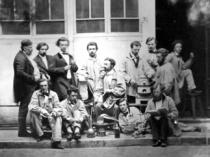