A charter for equality

Reflecting its humanist and socially responsible perspective, École Centrale de Lyon signed the ‘Charter for gender equality in institutions of higher education and research’ on 9 July 2013.

The institute thus made a commitment to stand up for the principle of gender equality, raise awareness of those principles and implement them among students and staff (administrative, teaching, research). This pledge has taken many different forms: use of non-sexist communications internally and externally, awareness-raising of gender equality among students and staff, actions to foster social mixing and diversity in all aspects of the institute (including clubs and societies), development of a policy to attract all types of students to science and technology, combat discrimination and sexist or sexual abuse, etc.

‘Centr’L’ is a group run by two gender equality advisers. It comprises current and former students, lecturer-researchers and administrative personnel. The group coordinates exchanges and activities that seek to push forward transformations in practices and representation. For example, it organises a week of awareness-raising events every year around International Women’s Day (8 March).

Centrale Lyon participates in different national think tanks, such as that of the Conference of Grandes Écoles. It also works in tandem with associations, such as ‘Elles Bougent’, with which a partnership agreement has been in place since March 2013. Elles Bougent seeks to encourage the entry of women into sectors that have a dearth of female talent, namely space, aeronautics, transport and IT.

The institute and students have co-authored a charter on the prevention of sexist and sexual harassment. It was signed by the student body at the start of the year. Since the start of the academic year in 2019, this charter enabled a prevention measure to be incorporated into the curriculum of students. A counselling centre was also established.

As part of the policy to attract young women to scientific studies, a ‘discovery course’ has been used to open the eyes of secondary school pupils in their final year and those on work experience to science programmes.

Alongside administrative personnel and faculty members, the institute has developed a ‘professional equality action plan’ coordinated by the French Ministry.

The mission is headed by two leads. You can contact them with any questions you may have.

Article 1 arose from the merger of two large associations that fought for equal opportunities: Frateli and Passeport Avenir. This new structure endeavours to form a society where a person’s choices, academic success and entry into the labour market do not depend on their social, economic and cultural background, but rather one where success derives from social bonds and responsibility.

In July 2011, École Centrale de Lyon decided to join the Passeport Avenir programme, now Article 1. Article 1 supports disadvantaged students by offering individual or group mentoring by and for students in their 1st and 2nd years. Several activities undertaken by mentors from partner companies are also established throughout the year with the goal of exploring professions, access to internships and international mobility. 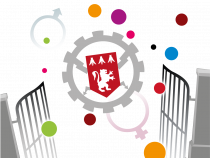 École Centrale de Lyon places a high priority on being open to everyone. It wants to ensure that students and staff with disabilities can develop within the institute under the best conditions.

Learn more about campus accessibility for people with disabilities